I am Helen Betts your local county council conservative candidate for Lakenham and Tuckswood. As a local resident I hear first hand from people what they would like done to make our area a safer place for our children, grandchildren and other residents that live here.

I am a wife, a mother and a grandmother. I am a conservative and a brexiteer, I have attended rally’s outside parliament with my fellow brexiteers to see that Brexit was done, and under our strong leader Boris Johnson Brexit was delivered to the people after he won a majority government in the last election.

I have been a resident of Lakenham for the past 30 years, my children have grown up in Lakenham and attended the local schools. My grandchildren are now growing up in Lakenham and also attending the local schools. I work full time as a taxi driver in Norwich and in the past 3 half years since I started I have seen many changes made to the road system. A system that has not eased traffic but caused more congestion around Norwich which then has caused more pollution in certain areas of Norwich especially during rush hour.

There has been many changes over the past 30 years in and around Lakenham and Tuckswood, some good and some not so good.

In 2019 the labour council tried to put double yellow lines outside residents homes on Theobald Road without asking the local residents if this was needed in the area. This would have caused a parking war down the road as there would have been limited parking for residents in an area that already has parking problems. Myself along with my fellow conservative colleague Robert Hammond went around and asked people to sign our petition to stop the double yellow lines being implemented. Fortunately, we did mange to get the decision over turned with residents happy that they can still park their cars outside their homes.

As a local resident in the area there is still a lot more that can and needs to be done to make the roads around Lakenham and Tuckswood safer for everyone who lives here. One area is Sandy Lane and Mansfield Lane, this road is used as a cut through route for traffic trying to get to Asda and the industrial site. I will campaign for this to be an access only area for residents and local business on this road, road calming measures that have been put in this area do not work as cars continually speed down this road with no thought for the safety of the residents that live in the area. I will also campaign to stop HGV lorries from turning into Mansfield lane from the junction by the Lakenham cock pub, this is in itself dangerous as many get stuck trying to manoeuvre around a tight corner and have damaged a local property on the corner.

Lakenham Way is an area that is used by the local community on a daily basis, this area is used by parents to drop their children off at The Edith Cavell academy, so it is important for the children to be able to walk this route without seeing drug users that congregate down there, dog fowling on the path way and fly tipping that seem to becoming more common, furthermore it needs to have better lighting on this route at night because before covid hit this country there were a few muggings on Lakenham way. I also would like to see more public bins in and around Lakenham and Tuckswood area.

As your local conservative candidate I feel passionately about making our area a safer place for our children, grandchildren and all residents to live in. 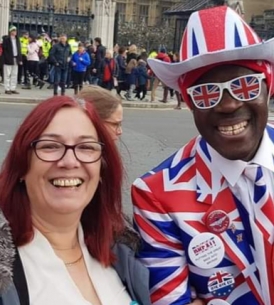